My friend Lynn is an always-friend. We met when my family was in the U.S. during my 4th grade year. Every time I came back to northern Indiana after that, I would find Lynn and the thread of our friendship would pick up, unbroken. We are friends simply because we are.

Lynn is now a minister and on a recent trip to Indiana to help my mother, it occurred to me that I finally had a Sunday free to go and listen to Lynn preach. She gave me the address of her church and even an approximate driving time. I left 15 minutes earlier than that, just in case.

As it turns out, I needn't have bothered.

With the address entered into my phone's GPS, I drove down highway 30, then turned north on 35. A few miles up highway 35, I came to a T-intersection. "Road Closed", said the sign in front of me. There were no detour arrows.

The smart thing would have been to turn around and go back down to 30.

I didn't do that.

Instead, and with apologies to Robert Frost, I opted for the road that looked more traveled and played my luck. After driving approximately west for several miles, I began to see a few houses. I looked around for a city limit sign. There was none. The road eventually took me to what could optimistically be called the town square. There was no one around. The only store said "Groceries" and "Open", but the light was dim and it seemed like this would be the part in the movie where the violins started to softly keen. I pulled into the empty parking lot and took out my phone.

"La Porte, Indiana", I asked my GPS. It obediently showed me the city somewhere to my north. I clicked on "Directions to there."

"Use current location?" my GPS wondered.

I said yes and waited. The cursor twirled and twirled and finally gave me an answer: "Location Unknown."

Just in case, I went through the steps again. And again. Each time, I was firmly advised that my current location was Unknown.

Maybe I should backtrack after all, I thought, and pulled out of the parking lot. As I turned up the other side of the street, I saw a couple standing in their yard. Several pots of new flowers sat ready to be planted in fresh beds under the windows but they just stood there watching me. They looked vastly amused.

They were also the first people I'd seen in that little hamlet. Pulling over, I rolled down my window and asked, "How do I get to La Porte?" My voice sounded a little plaintive, even to me.

"We'll get you out of here OK," the man assured me, grinning. "Just turn around and go to the stop sign. Turn right, then right again at the next stop sign. You'll go over the railroad tracks. After that it says "road closed", but turn left. Then around the next..." The directions went on for a while and I began to picture myself doomed to wander among cornfields for eternity. They would tell stories about me around campfires at night to scare little kids: the Woman Whose Location was Unknown.

As it turned out, the directions were easier followed than understood. The countryside was beautiful. Wildflowers edged the gravel road. I passed an enormous weeping willow by a small pond and for a moment was tempted to pull over and lose myself under its branches. Almost too soon, I was back out on Highway 35, now north of the roadwork.

By the time I made it to Lynn's church, they were singing the last song. Lynn whispered, "You're so stinkin' late!" and we giggled and hugged. I was glad she didn't ask where I'd been. I couldn't possibly have told her.

As it turned out, there was another service in just half an hour. Lynn delivered a straight-forward message on unvarnished faith and following - not even when, but especially when - life lands you where you never asked to go.

Like when your dad gets sick and you spend weeks helping him die as comfortably as possible.

Or when you try to help your mom go solo after 62 years of flying in formation.

Or when you have to rely on strangers because every source you normally turn to has no idea where you are.

Then faith whispers that on the other side of death is Life Unimaginable. Experience reminds you that solo is a formation. And when you finally reach your destination, you find friends who forgive you your most human moments.

It  was worth wandering the cornfields for.

Still, someday, if I can ever find a pause button for my life, I just might go wandering on purpose.

I've got a reservation underneath a weeping willow by a pond: Location Unknown. 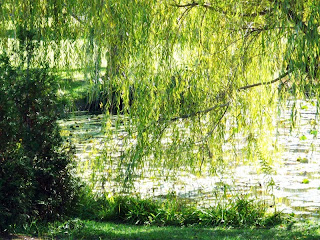 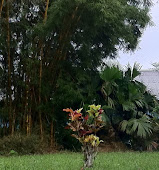